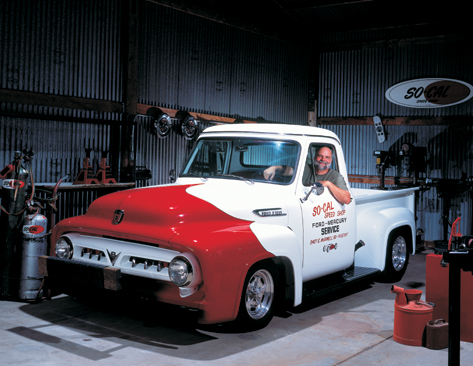 Frank started his legacy with cars in his youth, mowing yards and doing odd jobs finally earning enough cash to purchase his first “classic” a 1929 Model A square cab pickup at age 14. He started his career path hanging out after school at Antique Auto on East Indian School Rd. in Phoenix, the late Jerry Mundy’s store and restoration shop. Jerry would say, “The kid just wouldn’t go away, so I finally gave him a job.”

When Antique Auto closed in 1974, the void for a local classic parts store was soon filled with the formation of Vintage Ford Parts of Arizona; Partners, Wally Lassila and Frank Pittenger. They had a love for cars too but also other day jobs; Knowing dedication and talent when they saw it they swiftly hired Streff to run their parts counter. Frank first worked the counter, broadening his scope of knowledge within the classic car industry and soon became a parts expert and 1/3 partner in the business. Lassila wanted to pursue other ventures and sold his share, Frank was now ½ partners with Pittenger. They also tried their hand at manufacturing 33-34 Ford fenders for a time. After years of hard work and differing company visions Frank and Frank finally parted ways leaving Streff with the full ownership of Vintage Ford Parts of AZ.

With free reign to develop the business in his own style, it wasn’t long before the revamped Vintage Ford Parts really began to grow. Franks wife, Mary, came on board to help with the stores growing pains and keep the office tight. Having been raised by a father in the hobby herself, Mary fit right in. “To keep up with the rising hobby we added more inventories, and new product lines, expanding into Chevy car and truck parts and a full Hot Rod line.” Frank has been a member of many of the local and national car clubs, attended many shows, swap meets and events. He was enlisted frequently for judging competitions of Model A and V8 restoration; his expertise was sought after as the jenny and original authority.

Mary & Frank Streff inside the Structure of the New Buidling

Selling parts and dishing out restoration advice wasn’t the only thing Frank excelled at; he has had many garage projects of his own along the way, a 39 Ford Tudor Sedan, 65 GT Mustang Convertible, 70 Boss 302, 1928 Model A Phaeton, 50 Ford Tudor and a 36 Convertible Sedan, just to mention a few. One of the highlights of Frank’s car career was his participation in the Great American Race in 1989 as pit crew chief for Gif Austin and his 1930 Model A Coupe, which was sold new in Phoenix, AZ. Driving Coast to Coast, Norfolk, VA to Disneyland, CA. What a ride that was, “The best part was when we drove through these tiny towns in the heart of America, people would come out of the woodwork to cheer for us and the cars. We felt so welcomed, but that is how it always is when you are driving a classic or hot rod, you’re everyone’s friend.” 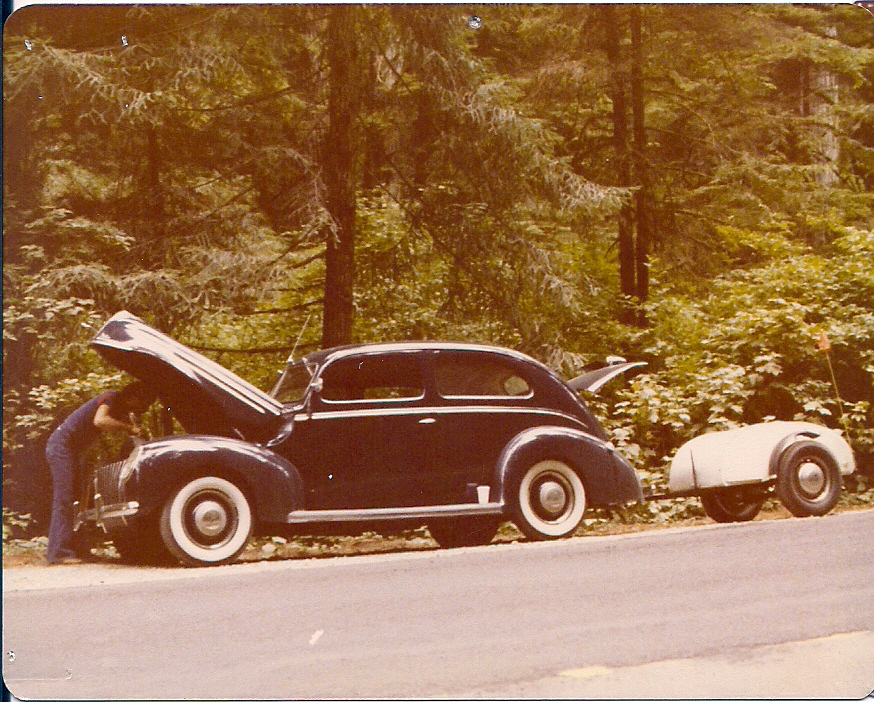 Frank assessing some cooling issues on his original 1939 Flathead Ford

As the car hobby and enthusiasm grew and so did Vintage Ford & Chevrolet Parts of AZ, we had already used every nook and cranny possible to display more inventory and finally decided it was time to build a bigger and better store. The new building was already in the planning stages when we got the call from Pete Chapouris. In 1998 Pete Chapouris and the newly reestablished SO-CAL Speed Shop were looking for a few good men “and women” to expand into SO-CAL stores. Frank and Mary were invited to Pomona to talk business. It was a perfect fit; they soon became SO-CAL Speed Shop Arizona. 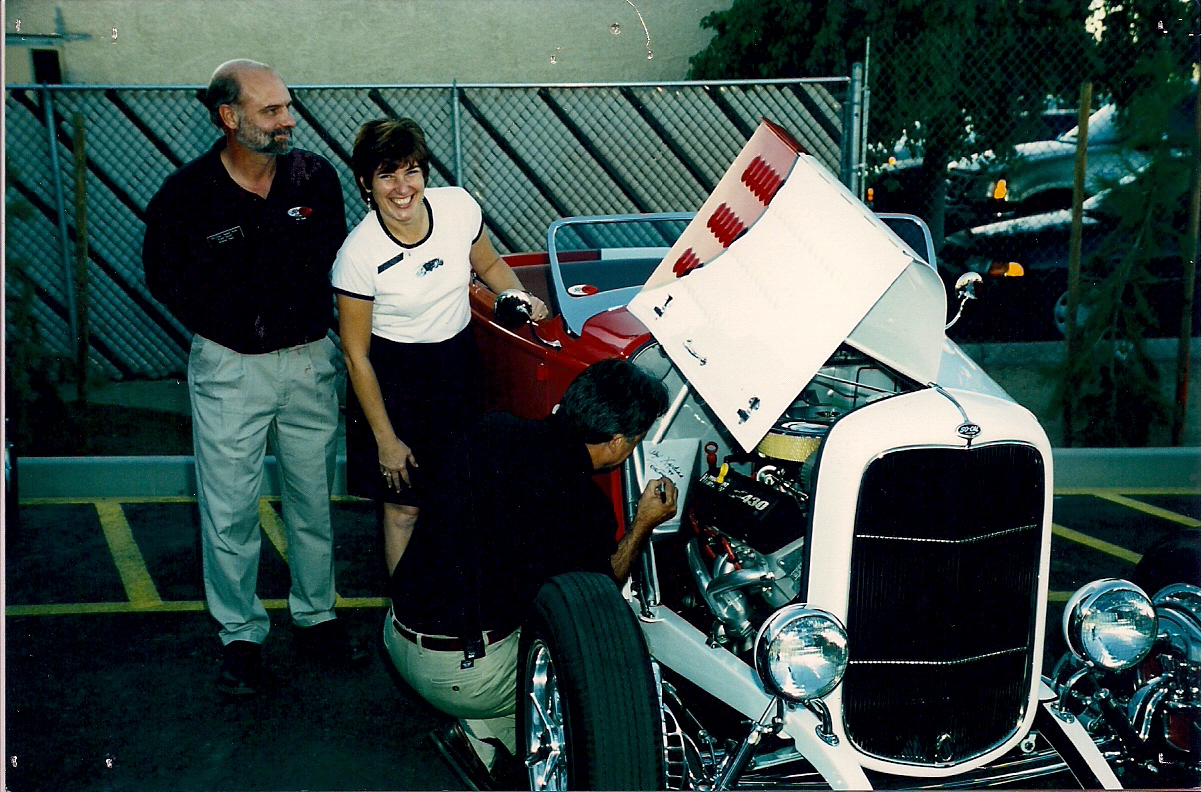 With the new bigger building SO-CAL-AZ and Vintage Ford & Chevy Parts was fondly referred to fondly by Alex and Pete as the “Flag Ship” of the company. It was even featured on the cover of Hot Rod & Restoration as the retail store of the year. In 2001 Frank decided to recreate the 1953 Ford push truck that Alex used at the drags and in Bonneville. This was a labor of love; Frank and Alex had formed a warmhearted friendship and he wanted to make Alex proud. After a year of hard work the truck turned out great; the build was followed in a four part series with Classic Trucks magazine and featured on the April 2002 cover. 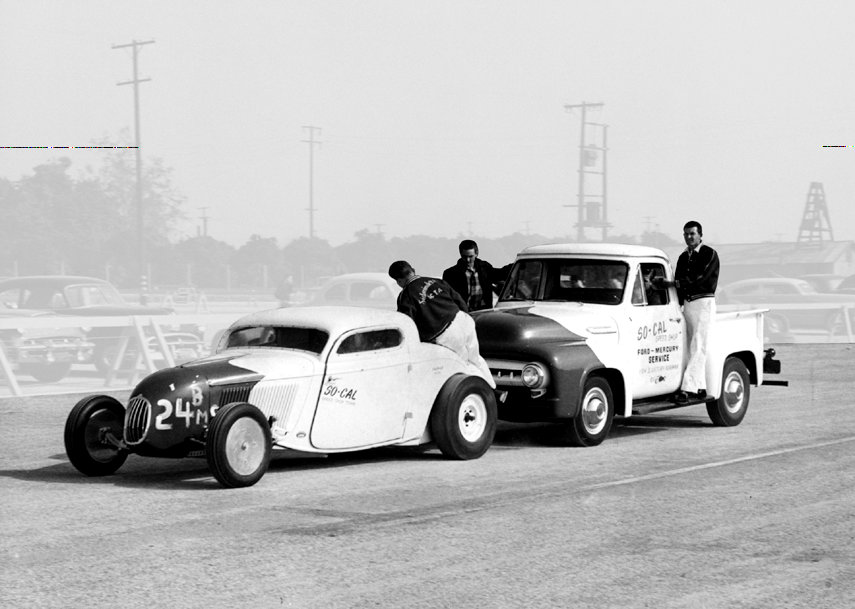 A lot has happened since then and in between but that’s it in a nut shell. Frank and Mary are still looking for new ways to improve the store and add to the already vast inventory. Even with 40+ years in his resume, Frank’s passion and business career in classic and hot rod cars and trucks is still happily to be continued... 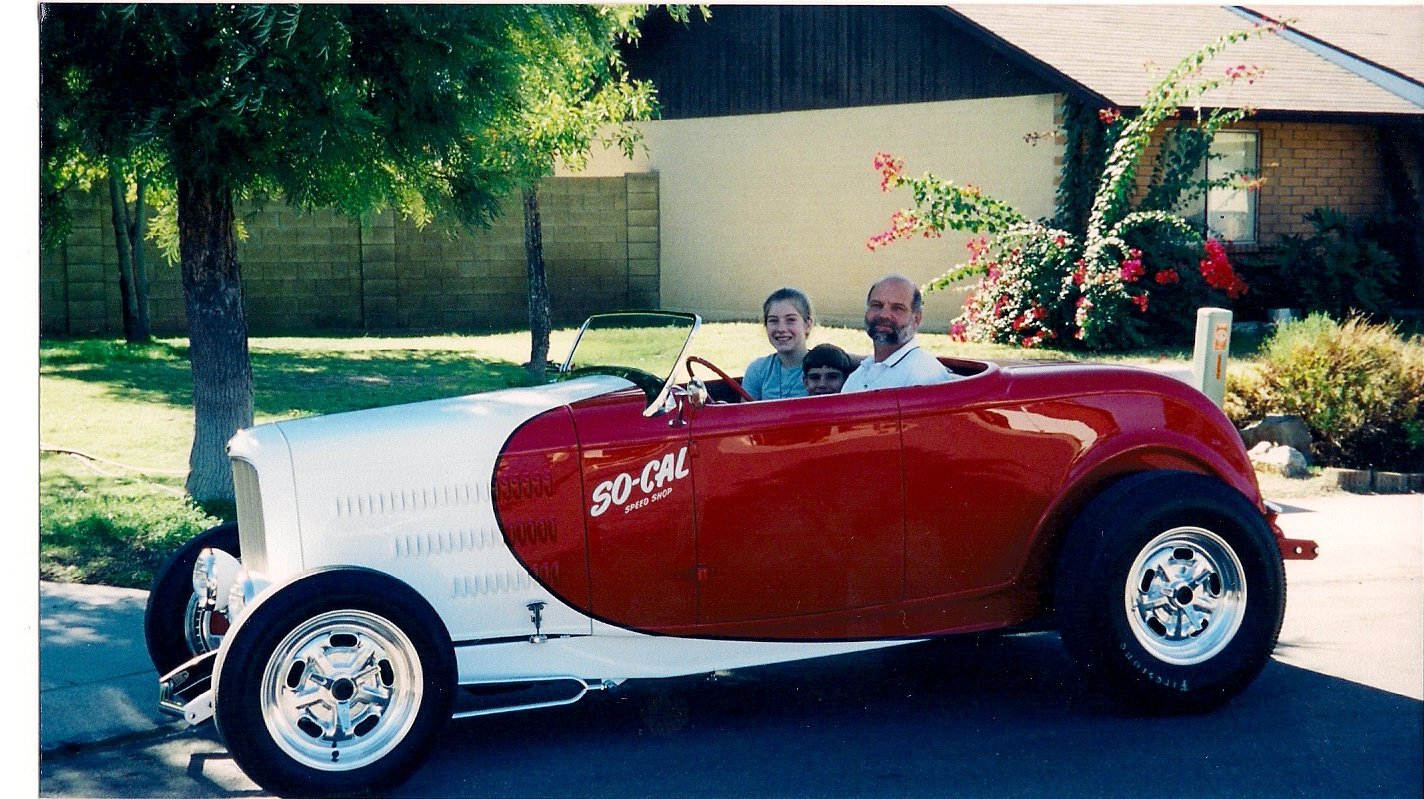 Frank going for a ride with children Bonnie & Nick 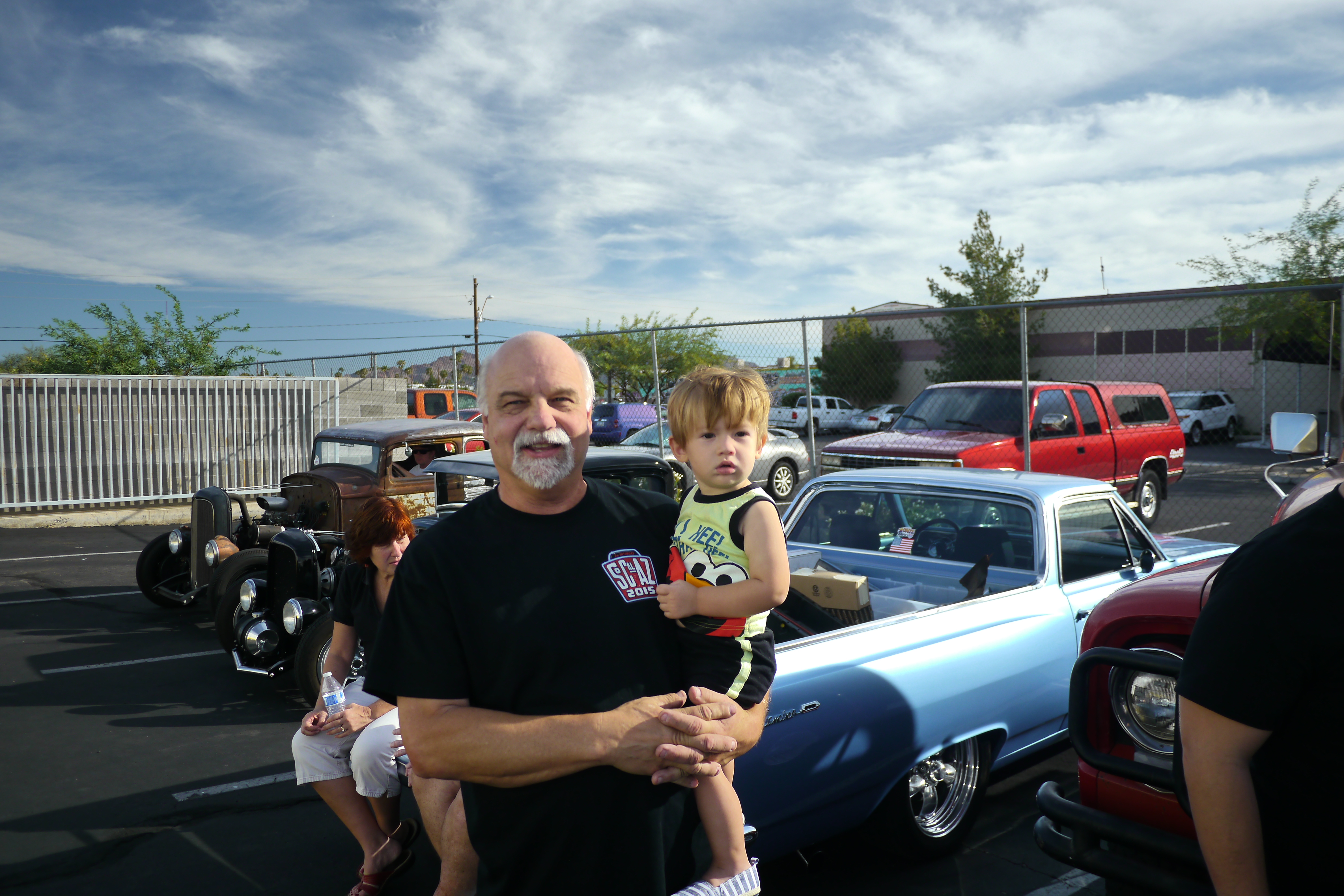 Frank and Mary Streff are proud to announce as of January 1st 2017, our longtime trusted manager, Brian Benzing and his wife Angie will be the new owners of SO-CAL Speed Shop Arizona and Vintage Ford Parts of Arizona. Brian has been an integral part of the shop for nearly 25 years and Frank's right hand man; a perfect fit to continue the SO-CAL legacy. 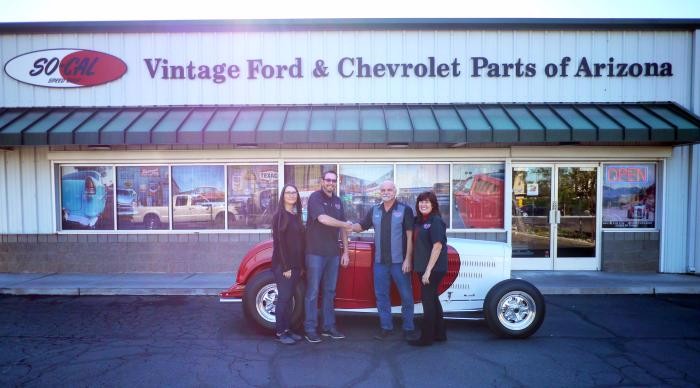 Frank & Mary Streff handing over the keys to the store (& SO-CAL Roadster!) to Brian & Angie Benzing

It's a win-win! After 42 years in our rear view mirror, we are ready to take on a new role in semi-retirement and Brian and Angie are both enthusiastically ready for ownership and looking forward to new horizons in the classic car and truck industry and hobby. Brian says, "Angie and I are excited for all the adventures this new road has to offer. With such great examples as Frank and Mary; in all they do, we are prepared and excited to take this trip, full throttle." 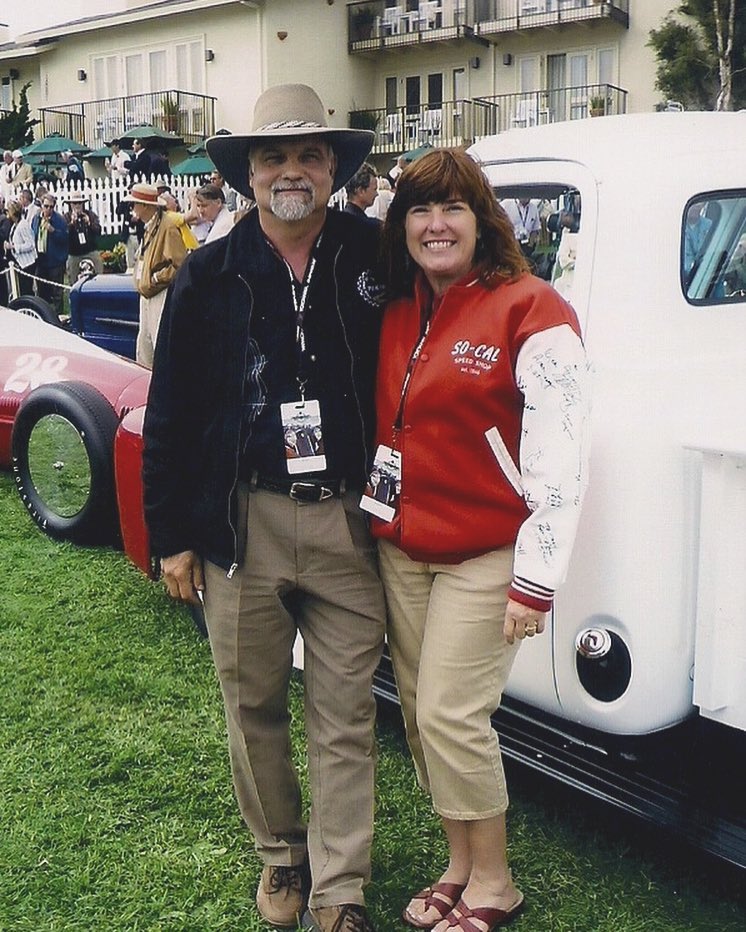 A Huge Thank You to all of you for the years of fun and success! We invite everyone to show your continued support and congratulations to Brian and Angie as they take on this new and exciting venture in their lives. See ya down the road!? - Frank and Mary Streff