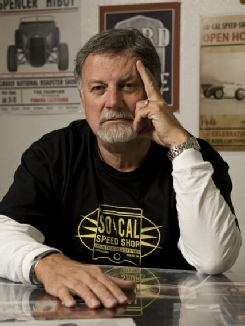 Pete grew up in El Monte, California, a suburb of Los Angeles, and started “cruisin’ the boulevards” as a young hot rodder with his friends around 1955. It was an influential time for a young man bitten by the rod and custom bug. Pete’s first hot rod was a ’32 roadster but at the time, he was in love with Gil Granuci’s ‘A’ coupe so he sold the body, bought a Model ‘A’ coupe and channeled it over the Deuce rails. Like most enthusiasts, Pete went through a string of cars, wheeling and dealing his way up market until he could afford a new ’61 T-bird which instantly became a semi-custom valley cruiser. 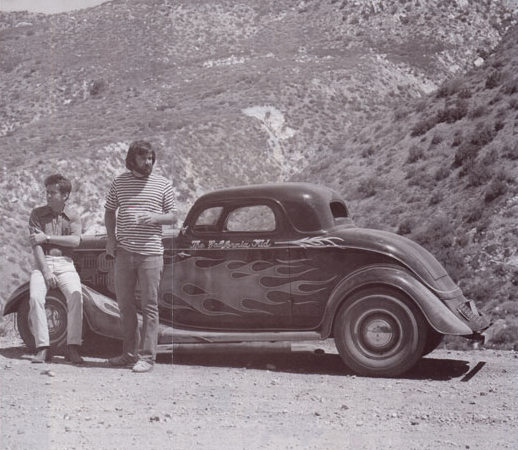 At the time, Pete was working as a product development technician at Clayton Mfg. Co., manufacturer of dynamometers. During his tenure, he met Mike Hoag who had left Blair’s to form M & S Welding with Sherm Gunn, building drag cars. Pete wanted to work for them and consequently took welding classes at night until they gave him a part-time job. In 1971, he left Clayton and went to work at Blair’s, a speed shop with a history reaching as far back as Alex Xydias’ SO-CAL emporium. A member of the Vintage Tin hot rod club, Pete began work on a chopped ’34 coupe that would have a seminal impact upon not only his life but also the hot rod world. Finished in traditional black and flames, the coupe was photographed for the cover of the November 1973 issue of Rod & Custom along with a similarly chopped canary yellow coupe of Jim “Jake” Jacobs. The two rodders hit it off and decided to start a small hot rod repair business in Temple City, California.

Then came the call from Hollywood, specifically Howie Horowitz, producer of the hugely successful Batman series. He wanted Pete’s car for a made-for-TV movie called The California Kid. The show starred a young actor named Martin Sheen. The Kid put Pete and Jake’s Hot Rod Parts on the map, and the pair ran a thriving business which, because of their innovative style and seat-of-the-pants marketing savvy, took the hot rod business out of the backyard and into the mainstream. Pete and Jake’s was eventually sold in 1987 and Pete went to work as Vice President of Marketing at the Specialty Equipment Market Association (SEMA). Having been instrumental in the formation of the Street Rod Equipment Association (SREA), the job was a natural and Pete became a driving force in the transformation of the SREA into the Street Rod Market Alliance, a council of SEMA. He was also elected into the SRMA Hall of Fame. 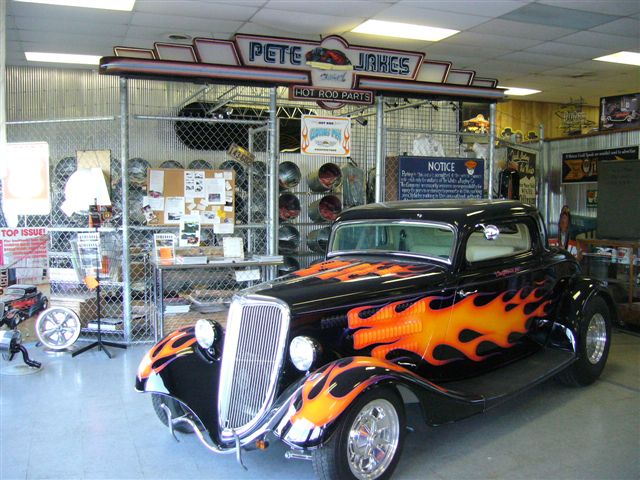 Pete has never been a desk-bound kind of a guy, and when it came time to move on from SEMA, in 1990, he formed an alliance with Bob Bauder and, among other exciting projects, completed a pair of Harley-Davidson “HogZZillas” for Billy F. Gibbons of ZZ Top. The friendship with Billy has resulted in numerous projects. In 1995, he opened The Pete Chapouris Group (PC3g) In Pomona, California. Under Pete’s direction, and with the help of his team of 17 craftsmen, PC3g quickly evolved into one of the world’s premier hot rod shops, garnering magazine ink for the cars it built like a Guttenberg press. One of the first cars that PC3g was involved in was the restoration, for Bruce Meyer, of the Pierson brothers’ coupe, which led to an enduring association and the eventual restoration of the SO-CAL belly tank Lakester. 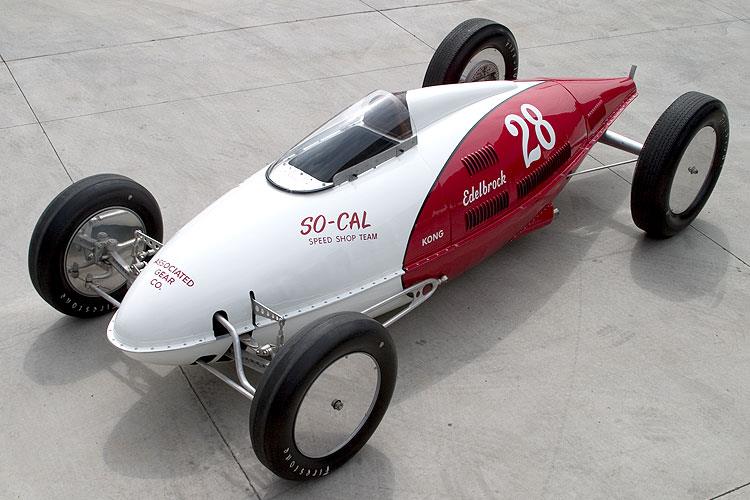 Cover-quality cars were produced by PC3g with prodigious speed and the list included Don Simpson’s “Killer Coupe,” several cars for Billy F. Gibbons including a ’36 three-window coupe and “Kopperhed,” and an extended-cab Model A pickup for Chuck DeHeras. The crowning glory in PC3g’s body of work is the restoration of the Doane Spencer roadster for Bruce Meyer. Built by Doane in 1948 to compete in the infamous Carrera Pan-American Mexican road race, this car has an impeccable pedigree. It also won the hearts of the Pebble Beach judges, winning the inaugural Pebble Beach Concours d’Elegance Hot Rod Class. It also won the perpetual Dean Batchelor Memorial Award for Excellence. The win at Pebble Beach was a fitting end to a chapter but not before Pete was selected as one of the Top 100 Most Influential People within the high-performance industry and, as such, was inducted into the Hot Rod Magazine Hall of Fame. 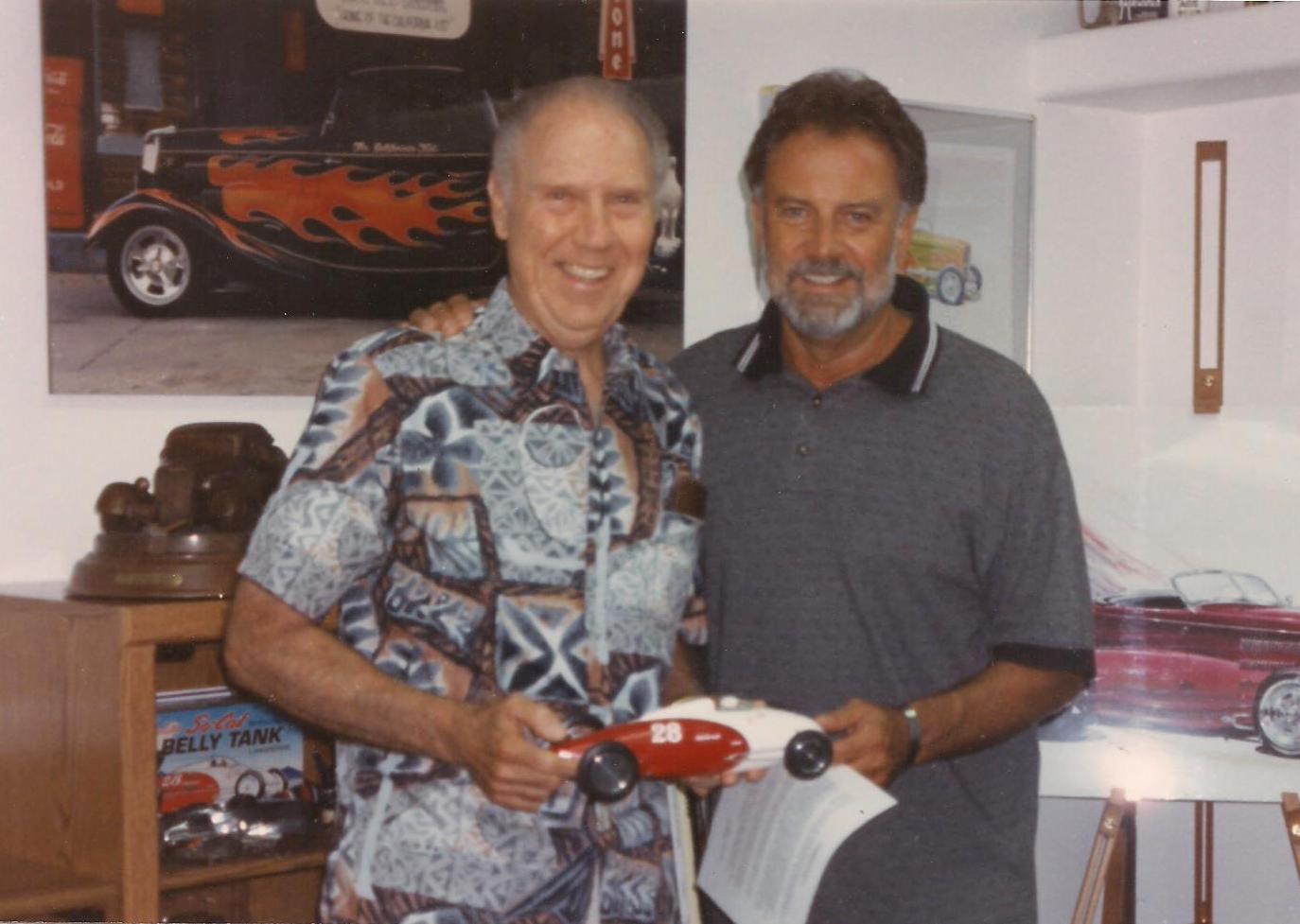 PC3g was a great little business but Pete new it would take forever to build the brand like the one he enjoyed with Pete and Jake’s. He had a great relationship going with Alex Xydias, the founder of So-Cal Speed Shop. 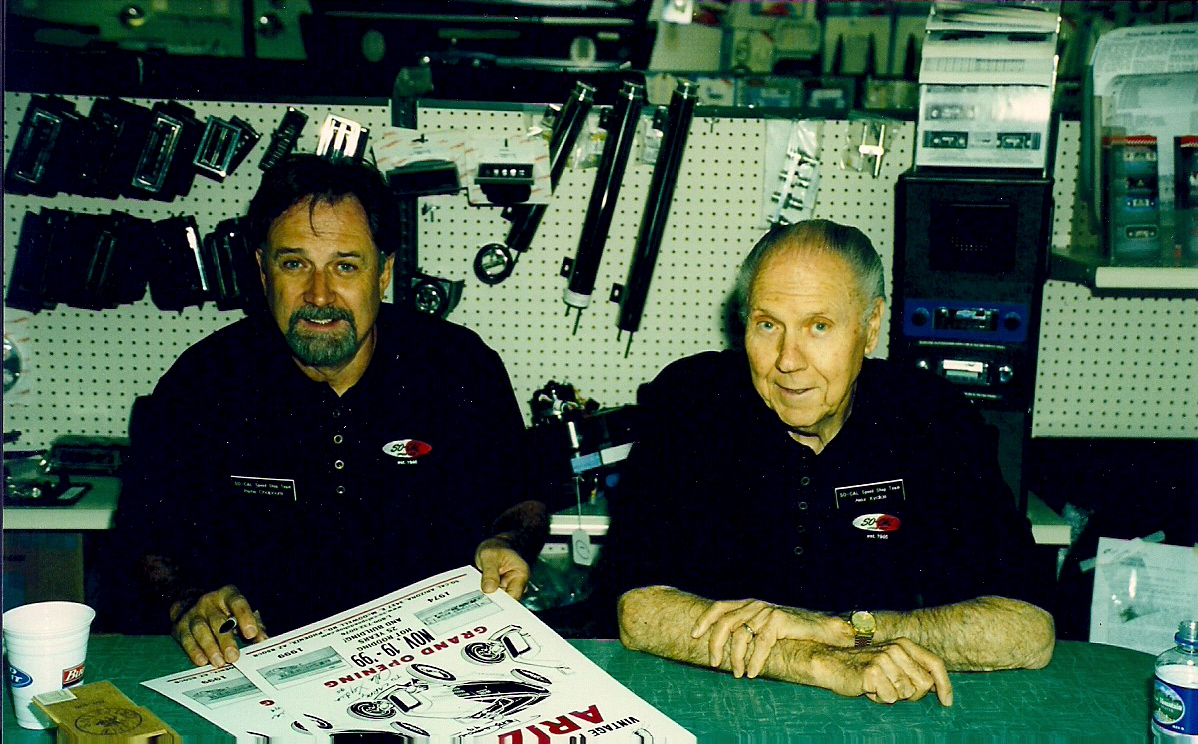 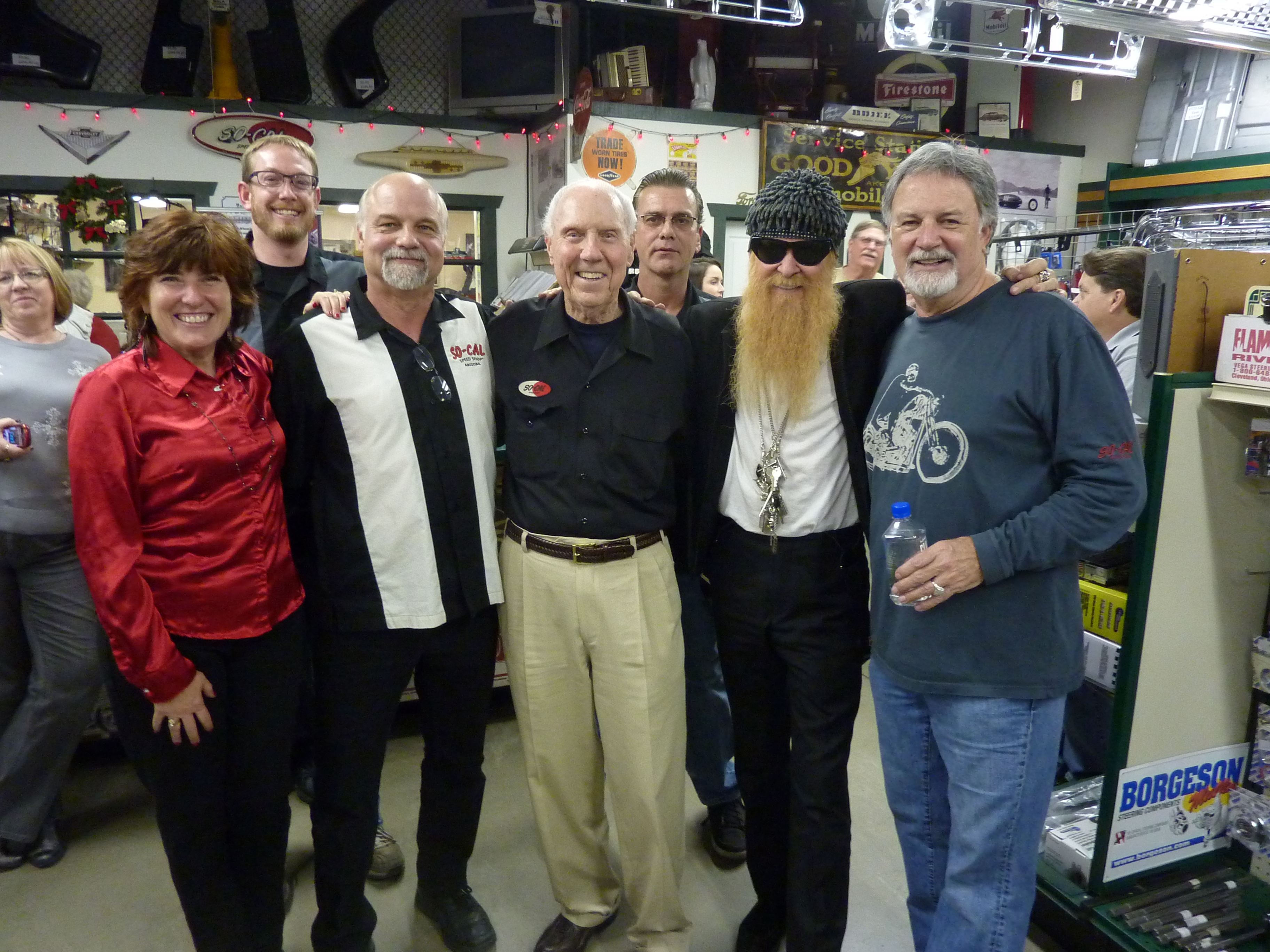 One afternoon, with fingers crossed, he suggested Alex entertain the idea of licensing him the SO-CAL name. Alex jumped at the chance and together they hit the road running and have never looked back. What started as a crazy idea in November of ’97 spawned a 30,000 square foot facility in Pomona boasting 30 plus employees and 8 retail stores coast to coast. A lot of ground has been covered over nearly 20 years but none more exciting than SO-CAL’s return to Its Bonneville roots. Pete and the SO-CAL team built 4 land speed cars for GM Performance and set a half dozen records putting 4 drivers in the 200 MPH Club. 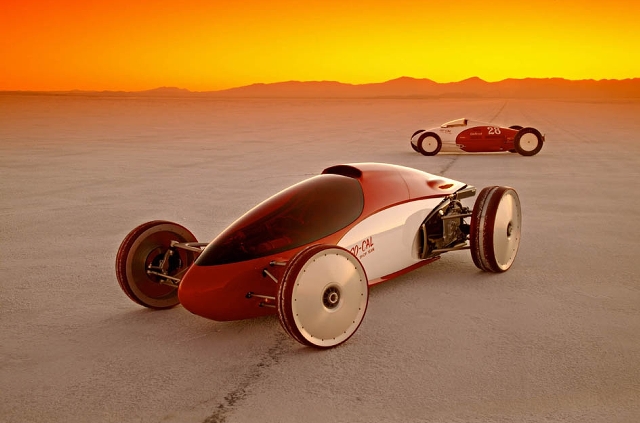 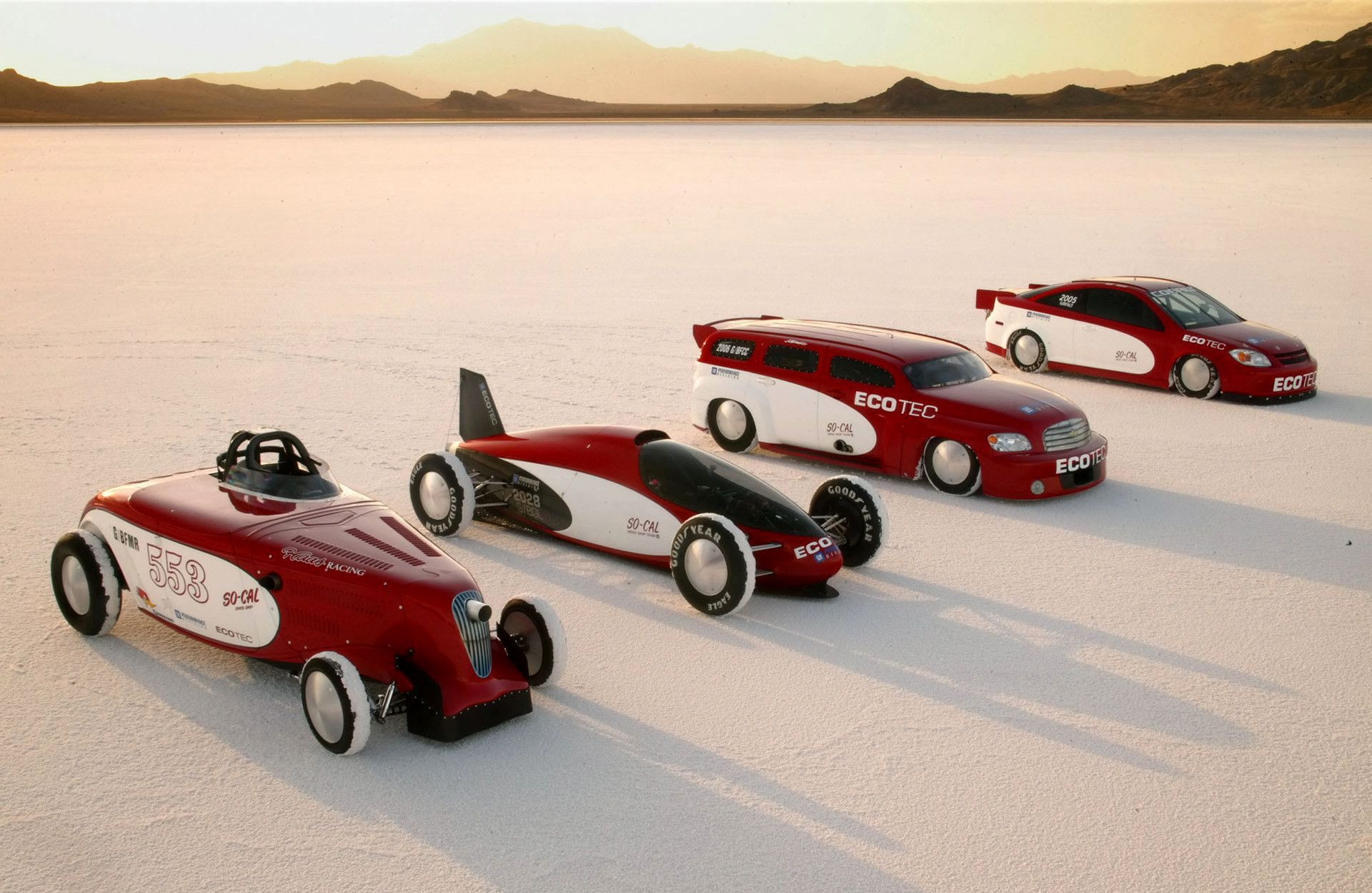 It is with deepest sympathy, we are saying goodbye to a great man; Peter Chapouris III passed away Friday, January 6, 2017. Icon, visionary, leader, mentor and our dear friend, words cannot express our sadness. He will be missed dearly and his legend will live on in our hearts and memories.